Paul Mason and Rachel Aspden in conversation with Aaron Bastani 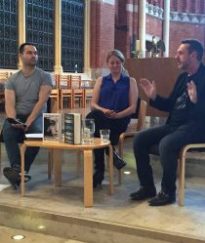 – Paul Mason is the former Economics Editor for Channel 4 News and Newsnight, where he famously covered the Arab Spring and the unfolding of the Greek crisis. Earlier this year he left Channel 4 to pursue his involvement in debates about the future of the Left. He has written a number of books including Meltdown, Why It’s Kicking Off Everywhere, and most recently, Postcapitalism. Paul is without doubt one of the most important political commentators working in Britain today.

– Rachel Aspden is a journalist and writer. She moved to Egypt in 2003 and spent several years covering the unfolding crisis in the Middle East, writing about Islam and politics in Yemen, Pakistan and elsewhere. After a stint as Literary Editor of the New Statesman Rachel turned to writing her new book Generation Revolution.

– Aaron Bastani is the co-founder of Novara Media and completed his doctorate at Royal Holloway. He has written for The Guardian, Vice, London Review of Books and has interviewed many public figures including Jeremy Corbyn, Natalie Bennett and Owen Jones.