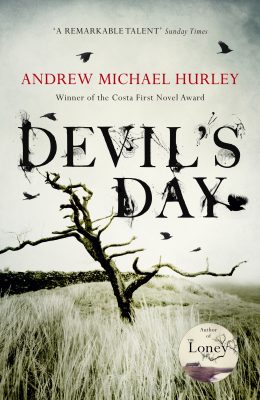 Join us at 19.00 on the evening of 1st November (All Saints Day) for an evening of frightening fiction with Andrew Michael Hurley and Laura Purcell.

Andrew became a publishing sensation last year when his debut novel The Loney became a word of mouth bestseller and won the prestigious Costa First Book Award and Book of the Year at the British Book Industry Awards. Readers were transfixed by this gothic tale of a strange coastline known as The Loney – a brilliantly unsettling and atmospheric debut.

In October Andrew publishes his much anticipated second novel Devil’s Day – the story of a valley, a blizzard, a family and the Devil. It promises to be brilliantly gloomy.

Andrew will be joined by debut author Laura Purcell, whose first novel The Silent Companions is published this autumn. Inspired by the books of Shirley Jackson and Susan Hill, it’s the story of newly married and newly married Elsie, who is sent to see out her pregnancy at her late husband’s country estate. Surrounded by hostility from the locals, and lacking company, Elsie discovers a mysterious locked room in her new home, and beyond its door lies a two-hundred-year-old diary and an unsettling painted wooden figure. Soon it turns out that Elsie is not as alone as we might think…

The authors will read from their books, discuss their writing, and answer questions from the audience. Not one to miss!

This event is part of the Dulwich Literary Festival, a month-long festival of books and ideas taking place in November. Click here to visit the festival website and see what other events are taking place.

Andrew Michael Hurley has lived in Manchester and London, and is now based in Lancashire. His first novel, The Loney, was originally published by Tartarus Press as a 300-copy limited edition, before being republished by John Murray. It went on to sell in twenty languages, win the Costa Best First Novel Award and Book of the Year at the British Book Industry Awards in 2016, and is in development as a feature film. Devil’s Day is his second novel.

Laura Purcell lives in Colchester, the oldest recorded town in England, with her husband. A former bookseller, her debut novel is The Silent Companions, published by Bloomsbury. laurapurcell.com | @spookypurcell