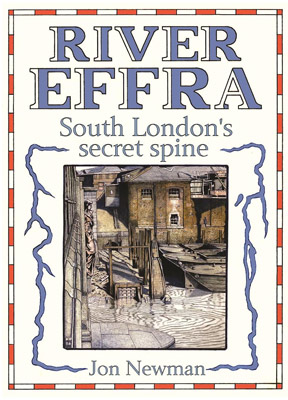 Ever driven along Effra Road? Had a pint at the Efrra Hall Tavern? Boogied at the Effra Social? If so, then you’ve been unwittingly communing with London’s lost river…

Join us at 19.00 on the evening of the 28th February to learn about the fascinating history of the River Effra – a forgotten tributary of the Thames that runs under the streets of London to this day. Local historian and writer Jon Newman will tell the story of this fascinating waterway, and its defining role in the history of South London. His book River Effra: South London’s Secret Spine has been a surprise bestseller in the shop and customers have described it as ‘fascinating’, ‘enlightening’ and even ‘moving’.

Tickets are £5 or £10 including a copy of the book. They can be booked here. This event will take place at Dulwich Books.

Jon Newman is a writer and archivist, dividing his time between working in Lambeth while also writing about London. He has previously published works on South London, black history, photography and – perhaps bizarrely – candle manufacture. He had long been intrigued by the history of the Effra (along with, seemingly, half the population of South London) and hopes this book will provide the first comprehensive history of a much-discussed and equally much-misunderstood river.